Skip to content
Next
Insights on The Increasing Threat of Drones 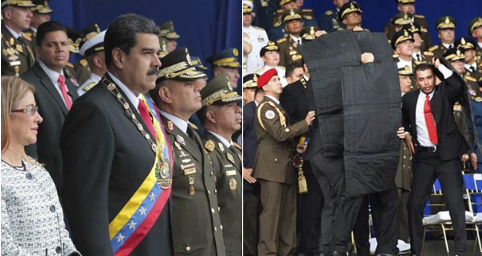 Nicolas Maduro seen prior to the attack and as Security guards protect him as he is evacuated from the scene.

On Saturday August 4, 2018, 1730 (local time) Venezuelan President Nicolas Maduro reportedly survived what appeared to be an assassination attempt after several drone explosions interrupted his speech at a celebration of the 81st anniversary of the National Guard.

According to reports (AP News), Authorities said that two drones, each packed with a kilogram of C-4 plastic explosive, were aimed at the stage where Maduro, his wife and a slate of the nation’s highest-ranking government leaders were gathered.

The devices exploded before reaching their apparent target. Authorities claim the military managed to knock one of the drones off course electronically and the other craft crashed into an apartment building two blocks away.

According to reports, two explosions were heard and seen in the air near the presidential area and along the parade route.  Witnesses who live in nearby apartment buildings said they saw a drone hovering over a residential street Saturday evening and then heard an explosion. A cellphone video captured by a witness was shown to the press, showing a drone crashing into a building. He said the drone fell to the ground and exploded, igniting a fire in an apartment. Another witness, Mairum Gonzalez, described running in panic to her fifth-floor balcony, where she heard the second explosion and saw smoke rising. “It was so strong the building shook,” she said. “It terrified me.” 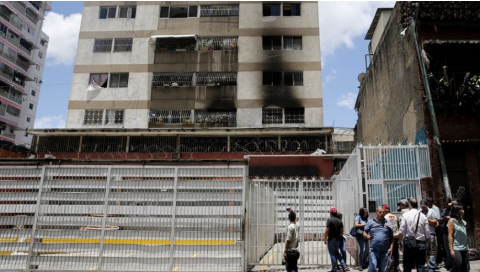 Images captured on live television showed Maduro and his wife looking up at the sky as the explosion struck and then hundreds of soldiers scrambling from the scene, an image of panic in stark contrast to the one of power and control the government tries to project.

President Maduro was evacuated from the event unharmed.  Seven soldiers were wounded in the incident and authorities say two suspects were detained quickly on Saturday after witnesses saw them operating one of the drones from a vehicle.

This is not the first time we have seen drones used as a means of carrying out targeted attacks, reconnaissance or harassments in recent years.  However, assuming the reports on this incident are correct, it would be the first time a drone has been used in an attempted assassination against a dignitary in a non-war and civil environment. 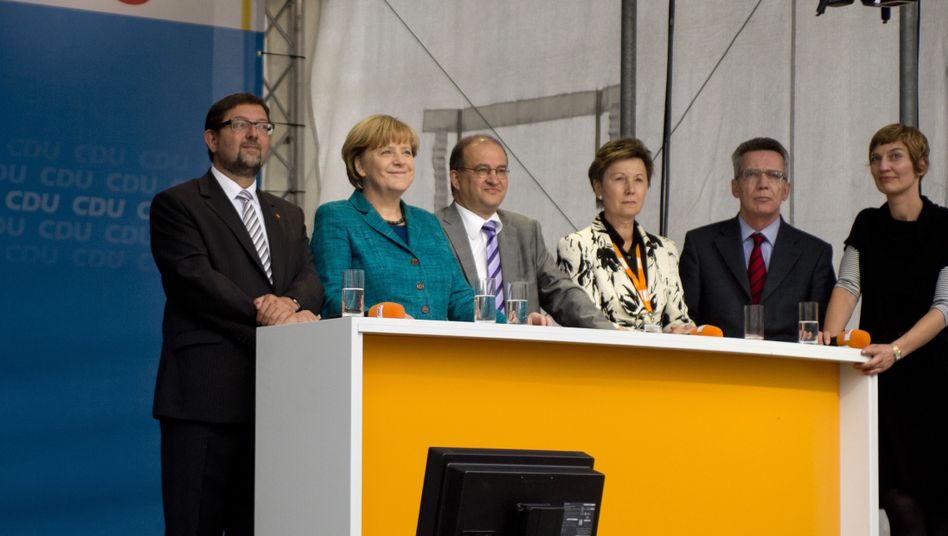 Image of the drone’s proximity to Chancellor Merkel in Germany.

In September 2013, a drone came extremely close to German Chancellor Angela Merkel and her Defense Minister during a CDU campaign event in Dresden, Germany in order to draw public attention to a political related cause. The harassment was carried out by the Internet activist Pirate Party.  The drone crash landed on the stage.

In January 2015, a two-foot-long drone crashed on the White House grounds. The pilot claims he hadn’t intended to fly the drone over the White House (The president and his wife were not present in the building at the time).  Police, fire and emergency vehicles swarmed the premises and the White House was placed on lockdown for two hours.

In August 2017, authorities thwarted an ISIS plot involving a drone attack on an air base in Turkey which is used by the United States Air Force.  Turkish authorities arrested Renad Bakiev, a Turkish national, on suspicion of being an Islamic militant.  Bakiev confessed to surveilling the air base and plotting to fly into an American aircraft to cause it to crash. 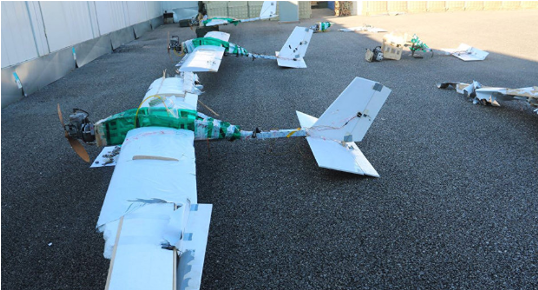 In January 2018 a small ‘swarm’ of drones attacked two military bases in western Syria. Ten drones armed with improvised explosive devices (IEDs) attacked a Russian air base at Hmeimim and an additional three targeted a Russian Naval CSS point.  According to reports, seven of the drones were shot down using anti-aircraft missiles.  The remaining six were landed by Russian electronic warfare units.  The drones were reportedly guided by GPS, either pre-programmed or controlled from as far as 20 kilometers away.  It is not clear whether the drones caused any damage but this attack emphasized the issue of swarms of drones.
According to reports, while the drones appeared primitive, they featured state-of-the-art electronics to allow for precision strikes. Following the investigation, the Russian Defense Ministry concluded that development of the drones used to carry out the attacks required trained experts.

In addition, in recent months, Hamas drones have been dropping IEDs inside Israel’s border along Gaza.  On May 13, 2018, Israeli residents identified two explosive devices attached to what appeared to be a small parachute. So far, there have been no casualties caused by this attack method, although some of the fires along the borders may have been caused by drones rather than the kites and balloons that have been typically used. Hamas has also used drones to carry out surveillance into Israel, a number of which have been located, tracked and intercepted by the Israel Defense Force (IDF).

In addition to the attacks mentioned here, drones have been used for trespassing and harassment in an increasing manner in recent years.
Airport activities have been halted throughout 2017 (Gatwick, New Delhi, Stockholm) and 2018 (Auckland, Tel Aviv) due to drone incursions. The UK Telegraph stated that “Drone near-misses with planes have more than tripled in two years”. Some 92 incidents were recorded in 2017, according to analysis of UK Airprox Board (UKAB) data. This compares with 71 during the previous 12 months and 29 in 2015. Former RAF and British Airways pilot Steve Landells, flight safety specialist at pilots’ union Balpa, described the figures as “very worrying”.

Sporting and music concert events have also been suffering from this new trend as seen at the Major League Baseball (May 2017), US Tennis Open (September 2017).

Commercially available drones are easy to acquire, operate and modify.  In recent years, we have seen the evolution of drones from recreational use, to being used to ship goods and to nefarious and adversarial purposes, in particular as their weight carrying and effective detach capabilities increase.

The basic GPS technology that drones use makes it easy to dispatch them to a specific target and then disappear, making it difficult to identify or locate its operator.

The technical challenge of thwarting a drone once it has been programmed on a specific mission is being developed by a number of private companies. Nevertheless, there are potentially significant legislative constraints on non-governmental or non-law enforcement entities that may prevent them activatating systems designed to detect and interfere with drone activities.

We have seen a number of different nefarious uses of drones in recent years including surveillance and carrying an IED, as listed in the case studies above.  In addition, the use of drones for the purposes of embarrassment and harassment has been growing, as was the case in September 2013 at the Chancellor Merkel event, in what could be seen as a more modern approach to shoe throwing or Pieing (throwing a pie at a VIP).

It is also important to note that even a small amount of military-grade explosives constructed as an IED-style drone can do considerable damage against certain targets. In addition, as was seen in the recent Caracas incident, a drone attack has a very significant impact on crowds, and in a large crowd event this would increase the potential to create panic leading to crowd crush and stampedes.

We can also assume a powerful psychological impact of such a successful attack, creating a fear of crowded places with the general public until authorities prove they can deal with the threat of drones. Suddenly, every drone in the air, whether flown by a child or by an authorized person (such as the press) would become a ‘potential threat’ in the eyes of the public.

We assume that we will see a rise in the use of drones for harassment purposes as well as larger scale attacks in the future. In addition to targeting dignitaries, these will be against urban and civilian targets in different security domains including aviation, events and critical infrastructures.

As more systems are developed to detect and/or take control of drones, it is vital for authorities to review the legislation on who may use them and under what restrictions. Limiting the authority for such activities to only the police and military will become impractical in the coming years, as the need for wider spread drone threat mitigation increases.

Drones threaten complexes, precincts and entire sites rather than any one site. We therefore recommend that stakeholders join together in workgroups to relate to and consider mitigatation options against the threat. This joint effort will develop and mature as the nature of the threat changes.

It is necessary to properly train security personnel to understand drones and the threats they pose.  In the same way that training covers potential threats such as suicide bombers, armed assaults, ramming attacks, etc. relevant security personnel must also understand the characteristics of different types of drones including what they may look like, the sounds they make while flying, how they operate and their capabilities.  Providing relevant security officers with a proper understanding of drones is an invaluable tool towards enhancing their abilities to detect them.