Skip to content
Previous Next
Making Sense of COVID-19 Testing

As security professionals, we look to technology and physical elements to provide solutions for threat mitigation. This may be in the form of bollards, blast shielding walls, CCTV or detection equipment such as metal detectors, millimeter wave scanners, X-ray machines, explosives trace-detection machines, and computed tomography. If we treat COVID-19 as another threat on our list, as discussed in our previous briefing, then it is appropriate for us to look at the state of detection solutions for the virus so that we can understand if and how the threat can be mitigated. Much has been written in the media about COVID-19 testing and this briefing helps clarify the current state of the technology, equipment and how to manage our expectations.

In security terms, each identified countermeasure will be analysed for its effectiveness in meeting one or more of the following five objectives:

Implementing a security measure that will be noticed and act as a deterrent, raising doubts about success (in this case of infecting others either intentionally or unintentionally).

Electronic surveillance equipment and other technology/techniques and coordination between parties to give the on-duty security personnel a way of identifying the cause of the alarm raised by the detection system and enable them to quickly assess the risk and decide on the appropriate actions to be taken.

Electronic equipment and general awareness to assist the security personnel in identifying a problem in the security zone or unauthorized entry to secure areas.

Physical protection including systems and procedures that deal with the risk posed by an actual threat and defeats or mitigates it.

Coordination and preparedness of staff and response teams assisting the relevant entities meant to respond to attacks in an effective and relevant manner.

The holy grail of COVID-19 detection would be a minimally invasive test that would give a yes/no answer within a few short minutes or even seconds. The question that must be asked before he/she can board the plane, enter the building or get on the bus is whether or not the subject is infectious. Such a test could use breath, saliva or blood and would be entirely chemical/biological using a kit or mechanical and chemical/biological using a device. 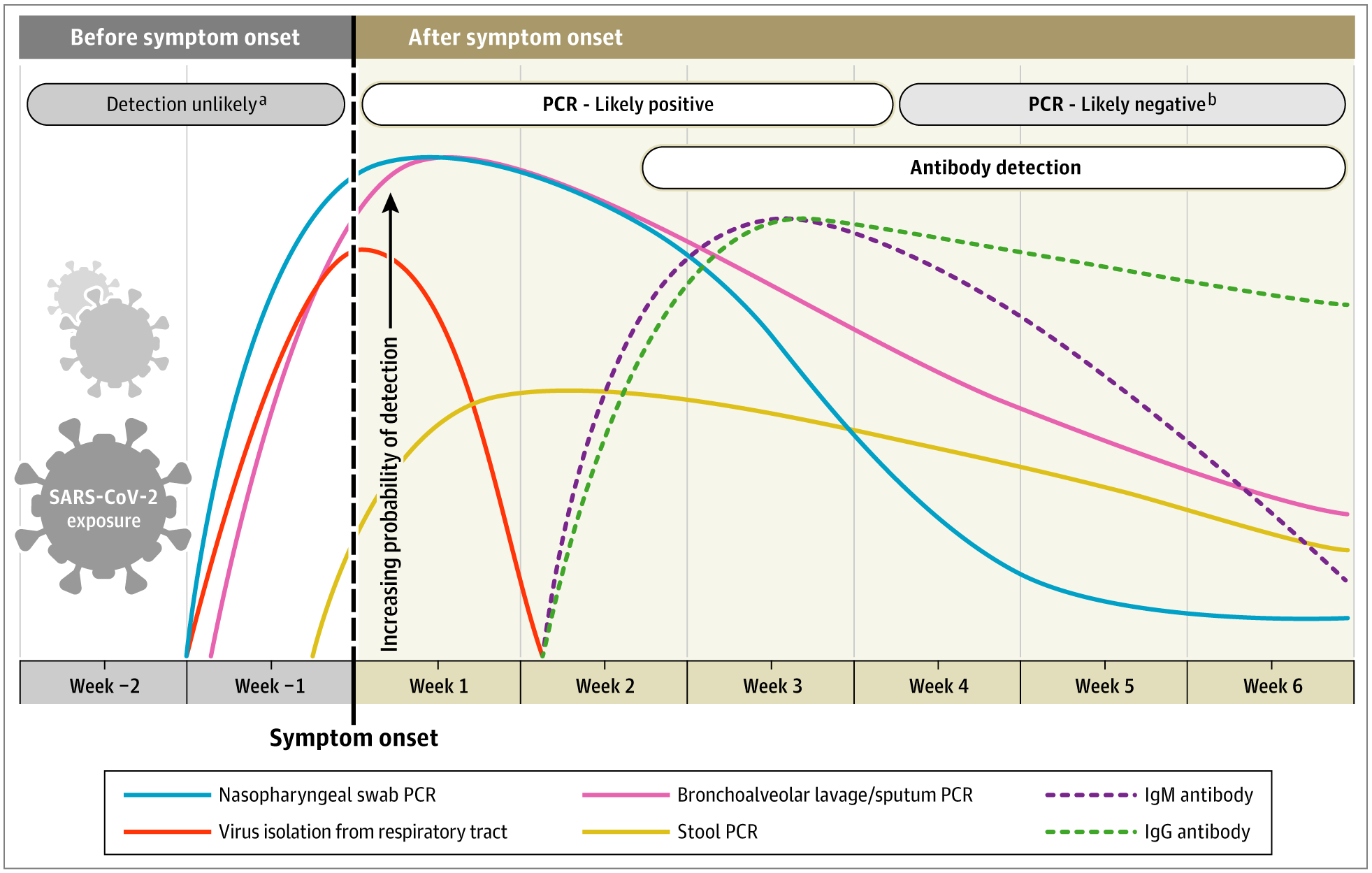 a) Detection only occurs if patients are followed up proactively from the time of exposure.
b) More likely to register a negative than a positive result by PCR of a nasopharyngeal swab.
Sethuraman N, Jeremiah SS, Ryo A. Interpreting Diagnostic Tests for SARS-CoV-2. JAMA. Published online May 06, 2020. doi:10.1001/jama.2020.8259

The types of testing are described below but the graph above demonstrates the lifecycle of the virus and the periods that different tests are appropriate and effective. It is vital to note that the time period of up to two weeks from exposure to the onset of symptoms is a period when people may shed the virus and possibly infect others but during which detection is unlikely. Most testing focuses on the period after the onset of symptoms.

Currently there are four types of tests being undertaken and we will briefly discuss them below: 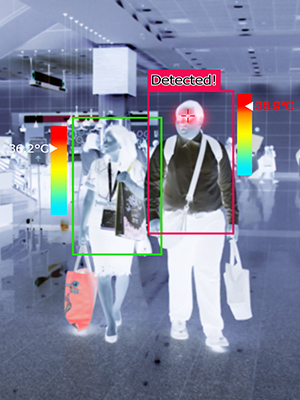 A fever can be caused by many medical conditions including viral, bacterial, and parasitic infections—such as influenza, the common cold, meningitis, urinary tract infections, appendicitis, malaria, and of course COVID-19. A fever is often brought down by taking temperature-reducing (antipyretic) medication such as paracetamol, aspirin or ibuprofen. A temperature check will therefore only detect someone who has a raised body temperature due to infection and either is not aware of it or is aware of it and has decided to chance traveling anyway. Most people are aware of when they have a fever and if they still want to attempt to travel could take medication to reduce their temperature.

Body temperature checking WILL NOT detect: 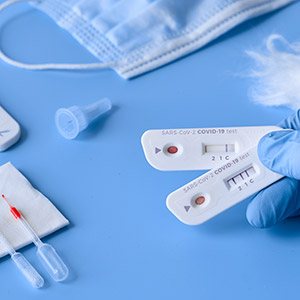 Antibodies (also known as immunoglobulins = Ig) are produced by the immune system to fight viruses and bacteria. In COVID-19 testing information you will see references to both IgM and IgG, which refer to two classes of antibody. IgM denotes antibodies that are produced soon after exposure to a disease-causing microorganism, while IgG refers to the type of immunoglobulin produced later. IgG generally confers immunity to a patient but as far as COVID-19 is concerned, it is too early to know the extent of that immunity.

The results of an antibody test could be one of the following:

Research and development are progressing rapidly and a number of private companies around the world are bringing antibody testing kits (serological tests) to the market with a variety of claims of how effective they are. Many are stating that they have CE (EU), MHRA (UK), FDA or CDC (USA) approval but these bodies are certifying them as safe to use and are in no way approving them as effective. There is very little controlled testing of how effective the kits are other than the manufacturer’s claims, so it is difficult to know if and how well they are working. A recent report by the CDC has suggested that up to 50% of tests result in false positives suggesting that the candidate has had the virus and has the antibodies. This has serious implications for our desire for a yes/no answer to  questions such as if it is safe for someone to board an aircraft. 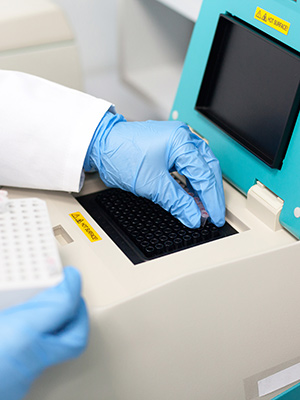 There is only one proven test that will show definitely if you are infectious or not at any given moment and that is a PCR (polymerase chain reaction) test which looks for the RNA of the virus itself and usually takes hours and not minutes. It is also time, labor, equipment, materials and cost intensive. For air travel, this is particularly problematic because at best, a scenario could be that all travelers are sent to be tested 24 hours before the flight and are requested to arrive at check-in with the results. However that would still require an intensive national testing infrastructure and a high level of automation to achieve. It would also potentially still let through people who became infected shortly before the test.

Many private companies are working on technology to offer the accuracy of PCR testing without the wait or the cost but it is unclear if they are able to detect the virus before the onset of symptoms and before the body starts producing antibodies. Much more research and testing needs to be done before any of these kits can be considered accurate and deployed en-masse.

Implications of COVID-19 testing for the Security Sector

Most COVID-19 testing today is undertaken to control the spread of the virus on a macro public health level rather than on an individual level, whereas we as security professionals are looking for a specific solution to successfully detect the ‘threat’ of COVID-19 on a person prior to entering a building or boarding an aircraft. Since there is as yet no definitive test to say if someone can infect others, from a security point of view the implications are that whatever detection technology is implemented will be for three reasons:

Translating this back to security terms we are familiar with, when creating a security master plan, we consider 5 factors with regards to a threat:

For someone who knows or suspects they have the virus, the multiple layers of COVID-19 testing and checking in place at airports or other public or private enclosed spaces are likely to deter them from trying to enter. For air travelers, since refund policies of airlines are still not clear, there may be a financial risk involved as well in booking a flight but then being prevented from travel.

Detection as described earlier in this paper cannot give a simple yes/no answer. The different methods can provide us with indications but not a clear answer. By questioning people and/or accessing tracking data from their phones (in countries where a national tracking policy has been implemented), it may be possible to determine more clearly how much of a threat a person represents.

The evaluation of a suspected case of COVID-19 is difficult and is somewhat dependent on government, airport and airline policies. SOPs will need to be written with flowcharts or other evaluation guidelines describing how to interpret the test results or the answers to interview questions.

Physical protection will be required to provide separation, distancing and quarantine of any suspected infectious people. This should be strict at entrances to airports or buildings could be relaxed after people have passed through virus testing and security.

With the rapid development of new technologies and lab procedures for testing, and changing government policies around the world, staff and response teams assisting the relevant entities must be ready to quickly change and adapt in an effective and relevant manner.

Because the question “Will this person infect others” cannot be definitively answered, in particular on a mass scale, airlines, airports and the general public are going to have to accept a certain level of risk. Governments may consider implementing a tracking regimen so that if an infected person is found to have travelled, all passengers on the flight/train/bus/boat would have to undergo mandatory quarantine for 14 days but that involves regulation and enforcement and can be difficult to enforce, especially on nationals of other countries. 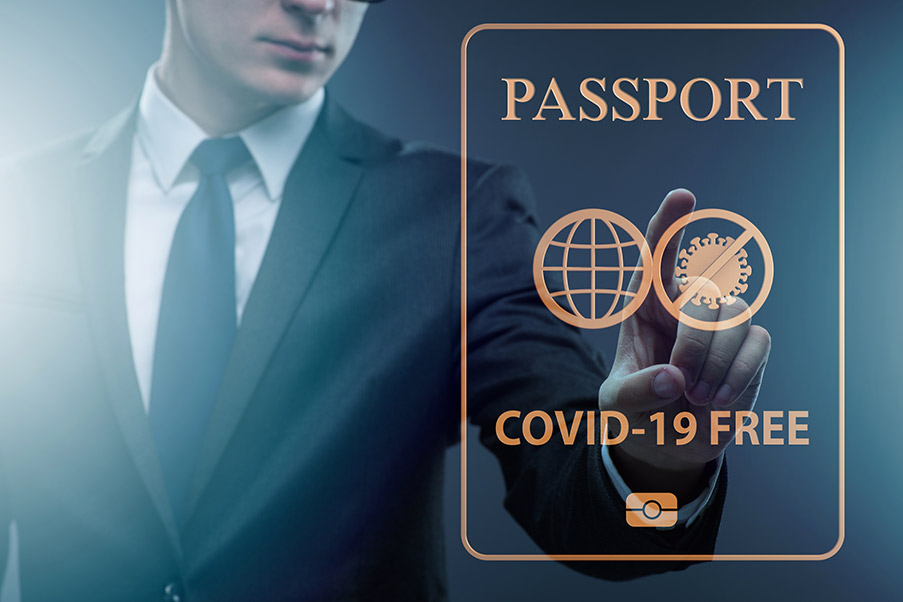 Despite some optimistic outlooks, a COVID-19 vaccine is still a long way from being developed or generally available since the fundamental process of R&D, clinical trials and efficacy and safety testing takes months or years. The time it will take to undergo rigorous clinical trials for any candidate vaccines will itself mean that we are unlikely to see a solution in 2020. Clearly travel will need to resume sooner rather than later and understanding COVID-19 testing technology and its efficacy and limitations is a key requirement for the security sector.